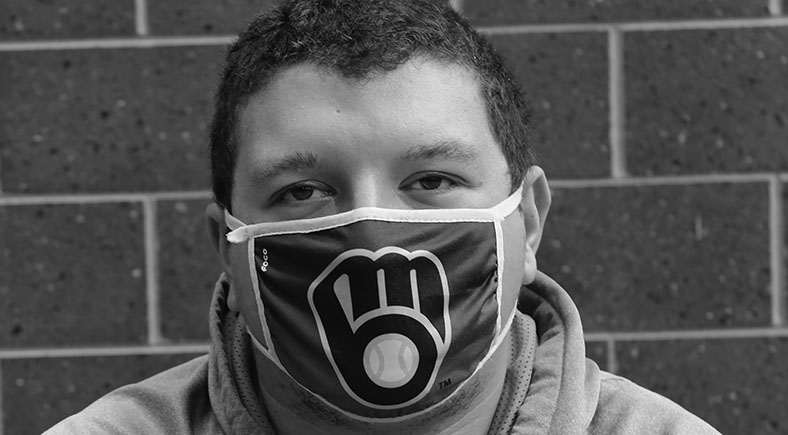 When you first meet Sean, you notice he is soft spoken and even gentle. But if you are lucky enough to engage him in conversation, you will soon learn that there is so much more than a first impression offers.

Growing up in Wauwatosa, he remembers a rocky childhood. School yard bullies made his formative years very difficult. “High school was particularly hard. I got picked on a lot. Kids would make fun of me and push me into lockers.” These ongoing issues led him to transfer to another area school, where he was fortunate to make a few good friends, some of whom have stuck by him over the years, but many who fell by the wayside. In addition to difficulties at school, Sean had an unsettled relationship with his mom. “I think she just didn’t understand me. She didn’t understand the mental health issues I was facing. Maybe she also faced her own problems which made it difficult to connect.” Sean also recounts his absentee father “I don’t like to even think about that,” Sean says as he shares that his father, who he never met, tried to kill his mom when she was pregnant with him. “I am glad he is not in the picture, but I wonder if the trauma he caused played a part in what I deal with.” While he doesn’t keep in close contact with his mom, Sean is very close to his grandparents. “I lived with them during high school for a while. They are always there to support me emotionally. Especially my grandpa. He is my best friend.”

Sean, who is diagnosed on theautism spectrum, has severe anxiety in social situations. “I have a lot of trouble meeting new people. It’s hard to make eye contact and hold a conversation.” His condition also makes it difficult to find employment. “It is hard to get a job. People don’t want to hire me because of my diagnosis. think I make people uncomfortable because I am so quiet,” he speculates.

The other constant in Sean’s life is his dog, Barney. “He is always there for me.” Sean notes. Barney, who Sean adopted from the humane society, has been by his side during many difficult times, and is a calming force in his life. Sean recalls one particularly trying time when one of his few close friends passed away. “Barney just sensed that something was wrong and never left my side. He was my constant shadow and just knew what I needed. Dogs are good with feelings. They just know what to do. You don’t even have to tell them.” In addition to the unconditional love that dogs so expertly provide, Sean appreciates that Barney never judges him. “He accepts me just as I am.” Sean also values the relationship he has with his Our Space Peer Support Specialist, Robbie, who he has worked with for over a year and a half. “Robbie helps me by just letting me talk. He meets me in the moment. He has helped me come out of my shell a little bit.”  For his part, Robbie has seen immense growth in Sean since they began working together.  “He is more willing to try new things now. This is a big deal because it helps him look towards a brighter future.”  A future that Sean hopes will include a family and perhaps a career working with animals.

In the end, Sean’s story is so much more than his diagnosis. When asked what he wants people to know about individuals who struggle with mental health challenges, he simply says. “We are still people.” He notes that it can be difficult at times because of the stigma that comes with mental illness. “Sometimes I feel like people devalue me because of my struggles. But everyone has something they struggle with. This just happens to be mine. We still have something good to contribute to the world.” How can you help Our Space? Your donations, no matter how big or small, help us to create a future of hope for people like Sean. Consider partnering with us, and together we will Unmask the Face of Mental Health.